Must have old Firefox extensions , and how to install them

Firefox versions before 57 , had a lot of plugins , which are still useful today . This tutorial , will show how to install a version of Firefox , with which , the old plugins still work , and it will detail , the most useful plugins . 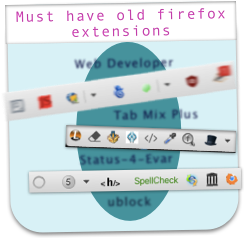 1- Installing a Firefox version with which old plugins work

Once a version of Firefox less than 57 , or a Firefox alternative , has been downloaded and installed , and to be able to install classic extensions , the extension Classic Add-ons Archive must be installed . This extension can be downloaded from GitHub .

For the Classic Add-ons Archive plugin , to be successfully installed , unsigned extension installation must be allowed . This can be done by visiting the about:config page in Firefox , or one of its alternative , and toggling the xpinstall.signatures.required setting to false .

Also , the multi-process mode must be disabled . This can be done by visiting the about:config page in Firefox , or one of its alternative , and setting any browser.tabs.remote.autostart to false .

2- Must have classic Firefox plugins